Press release: SVAB to launch electrical joystick base at Intermat 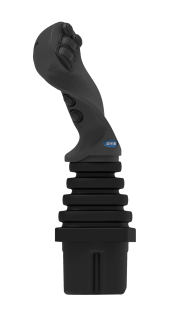 In line with SVAB´s strategic objective to be a world leading provider of efficiency enhancing products, functions and ergonomics for excavators, SVAB will launch its new electrical joystick base at the Intermat fair in Paris. The SVAB L8 joystick grip has since its introduction been the clear market leading product for advanced joysticks for excavators equipped with tiltrotators. The new electrical joystick base together with the SVAB L8 joystick grip will lock up new opportunities for excavator manufacturers and distributors.

As the tiltrotator is gaining significant momentum on the international market the need for advanced multifunctional joysticks has followed. Each year SVAB deliver thousands of joystick grips as a key component to control systems for excavators equipped with tiltrotators. The SVAB L8 joystick is used together with all tiltrotator brands and with different control systems.

The majority of these control systems are currently installed by excavator dealers before delivery to the end customer. One implication of this business model is that that thousands of original joystick grips are replaced (wasted) each year and that tiltrotator installations may look different depending on country and excavator dealer.

As a result many excavator manufacturers already offer, or are in the process of offering, tiltrotator control systems and advanced multifunctional joystick grips directly from their factories.

Another clear trend is the move towards replacing the hydraulic base of the joystick with an electrical base. This allows excavator manufacturers to cut component costs as well as installation time while at the same time offer additional functionality. Based on this customer demand SVAB has developed its own safe, rugged and compact electric joystick base that, together with the multifunctional and ergonomic SVAB L8 grip can be configured in a variety of ways depending on customer needs.

“We have worked extremely hard on maintaining the distinctive feeling of the hydraulic base in order to give the operator the best driver experience while at the same time allowing the customer to take advantage from all the benefits of an electric joystick”, says Fredrik Eriksson, CEO of SVAB.

The joystick will be available for demonstration and testing at SVAB’s stands 5A J 163 and 6 F 024 at the Intermat international exhibition.

In order to offer you even better products and services, we would appreciate if you answer a few questions about us!

The survey is anonymous.
-> To the survey (in English).

Help us get even better, answer some quick questions and get the chance to win an iPad.